Why Wasco and not some other game? 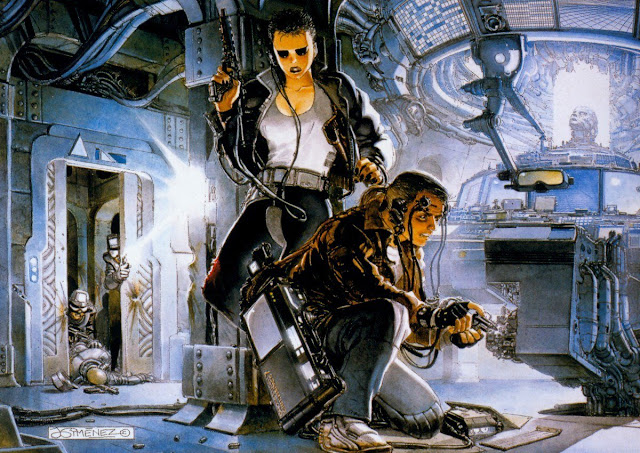 I had a very difficult time finding a good picture for this post so here's an illustration
by the famous illustrator Juan Gimenez.

This is a topic that made me think a lot and it's important to think about this. Through thick and thin you will fall back on many things that will keep you going and the answer to why just maybe the strongest one of them all. It was at least the strongest one for me. If you know why you're in this mess then you can most often answer if you should quit or keep going when times get tough. If you don't know the answer you're either going to lunge into a crisis and lose a lot of time thinking about it or yet worse give up because why not do something else. It's a bit of a soul searching as well as putting your feet down on the ground.

I started work on Wasco because after I played the prototype Erhan made I told myself: "Man this was such a fun little game. I want to see games like this and as a matter of fact I want this prototype to reach a release. I want to play more stories like this. Erhan created such a smart bit of short but sweet story with a witty and fun environment. Why aren't there games like this?" This was the emotional bit. The spirit bit. This part is just as important as the other part which appeals to the pragmatic, calculated and realistic.

Before I seriously started working on Wasco I worked on it for about a month or two preparing a road map of how long it will take and what assets we need and what sort of effort we need to put in it. I did all of this for fun on my free time because I was 'considering' working on it at the time. Then I had another month where the work was a bit slow so I started handling it as a hobby project. When you're working on 'porting' mechanics it's mostly solving programming puzzles. That's what I did to kill time, I solved programming puzzles for Wasco for fun. Then work picked up again so I had to stop.

Then when work slowed down again we talked with Erhan and I considered six different game concepts for the course of a month. I came up with financial projections for how much things will cost and how much we're hoping to make for all these concepts. For each one there was a sheet of paper that listed pros and cons. I talked to an old colleague from the Industry for a third party opinion, made my pitches to him and discussed what I should go with. In the end all answers lead to Wasco because it was the smartest choice. It was the option that I could finish fastest and it was also the option that appealed to my taste. Financially speaking although it wasn't promising at all, it was the fastest one I could roll out.

Take a look at the pros and cons list of Wasco:

Pros:
-Matches Vision: It's a story oriented game and that's what we'd like to make.
-Prototype Ready: Has a playable prototype which removes a heap of design work. Requires considerably less time to port and make than a new project does.
-Small Scope: Scope of the game is very small. It only takes 1 hour to finish it. Less work necessary than otherwise.
-Has Spirit: The story and the game has character and soul. This is one of the most important things out there.
-Additive: The story could be turned into series given the right type of story to follow up.
-Technologically safe: All features and tech involved benefit from the fact that they've been tried and done a million times before.
-Release Platform: Targeting a platform we're familiar with.
-Bitesize: The project is small enough for one person to handle over a period of time.
-Fastest: Out of all pitches it is the fastest one can finish and release.

Cons:
-Tough Competition: There's about a billion games like this one. The game needs an edge to show uniqueness or a hook. That is very difficult given its forte is simply a good story.
-Marketing Inexperience: No idea how to do marketing for a game like this. No idea how to find a publisher for a game like this. Lacking lots of xp required to bring it out.
-Length: Length of the game is quite short so people may not find it interesting enough to pay for.

See you next week!
at March 09, 2018
Email ThisBlogThis!Share to TwitterShare to FacebookShare to Pinterest