Working on splash-screens and a progress-bar for Wasco

At the day I was writing this blog I had laid some design work early on. After I was done with that I decided it would be a good idea to focus on something trivial and not too tiring because handling design is almost always something that requires a lot of critical thinking. One of the things I learned the hard way is that if you're in any kind of development you'll need to manage the stamina of your head. If brains were made of muscles, critical thinking would definitely be in the bunch. It is possible to exhaust this 'muscle' and even overuse it to the extent of needing several days for it to recuperate. Bottom line is that you should watch out for yourself. Burning out and stacking exhaustion is a must avoid! (Unless it's absolutely necessary for short-term once every blue moon.)

I took the initiative to wait on more critical features and  ended up working on the splash-screens for Wasco. (Obviously different teams will have different pace and due dates. I was able to afford taking this 'break'.) Below is a .gif of what I was able to do in approximately two hours time.

The end product. A cascade of splash screens working as intended.

It was a bit of puzzle solving since Unity has deprecated some of the older syntax but being such a popular and well maintained engine, documentation is almost never a problem. Below is a screenshot of the inspector for the script I wrote for this. 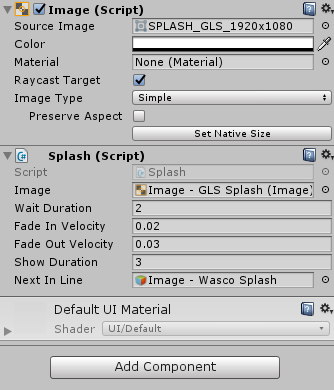 Inspector view for the Splash.cs script.

Hope you enjoyed this, next up is more mindmaps and design compasses regarding Wasco.

PS: Unity now has a built-in splash system and since that came out I converted to using that.
at July 24, 2017
Email ThisBlogThis!Share to TwitterShare to FacebookShare to Pinterest